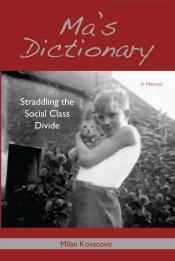 I. Activities related to this memoir project

Publication of eight French and English chapters from work-in-progress.

"I could not put this book down..... It opens the door and welcomes us into the author's amazing and unusual life. Milan K. tells his story with a raw, yet humorous, honesty. The book is so well written that I found myself swimming happily in the detail (which is saying something since I'm the type of lazy reader who is normally ferreting out the bones of a story and ignoring the rest). Read this book and take yourself on a luscious and thought provoking journey. I promise you won't be disappointed."

"When a friend gives you a book that he wrote for you to read, you can easily be prompted to think: "Well, this is not what I want to read right now, but I will... so that I can tell my friend that I did!" And I have to confess that these thoughts were mine when I was given this book by its author. How wrong I was! I read this memoir, which to me felt like half a novel, half a sociological study, with so much pleasure! As I was discussing it with another friend who had read it too, we came up with the idea that each chapter, or paragraph, was like a piece of chocolate that you could savor anytime you felt like it. That is what Milan's writing does to your brain: a mix of linguistic beauty (it makes you love English even more to see what you can do with it) and intellectual revelations, exposed ever so gently, with a graceful modesty. If you are a reader, there is no way this book will not touch a part of your intellect and meet your spiritual expectations. It might even make you want to share it with people around you (I am not counting the times when I had to share a passage with the person around me, and all the quotes I intend to use one way or another). Thank you for this gift, Milan!"

"The author writes honestly about his amazing life story which propels him across country and class lines repeatedly in his youth. He tells interesting stories to capture his environment and shows great insight about the people and the circumstances around him. I thought this book would be interesting since I had been a student of his at UMD 25 years ago and found him to be a great professor who had an unique outlook on things, but I was surprised at how captivated by this memoir I was, I couldn't put it down! I will whole heartedly recommend this to anyone who wants to read about a thoughtful reflection on an interesting life."

"On the surface, this is a sweetly told and fascinating memoir; underneath, it's an understated but powerful commentary on life from the perspective of a man who has experienced it in strikingly diverse ways.

As Milan Kovacovic unfolds his complicated family history, he shares wonderful stories and astute observations. His descriptions of day-to-day life with his elderly peasant guardians in northern France -- who didn't even have running water in their simple dwelling -- are captivating and stand in stark contrast to the privileged life he experiences later while living with a wealthy Parisian family. In a typically philosophical way, he reflects on his early childhood in Normandy: "I lived a life made rich, ironically, by our destitution and our archaic mode of living. This paradox can be viewed as the revenge of poverty, which magnifies sensory perception and makes one forever appreciative of the smallest satisfactions, including creature comforts taken for granted by more privileged people."

Milan Kovacovic is a keen and thoughtful observer, and the stories in "Ma's Dictionary" are beautifully told with honesty and humor. His insights on human nature, education, social class, culture, immigration, government and justice are both entertaining and thought-provoking, and make this a warm and rewarding book to read."

By Paul Wellstone, Political Science Department, Carleton College. Subsequently two-term U.S. Senator from Minnesota, and ahead in the polls for a third 6-year term, until his untimely death in an airplane crash during the last week of the campaign in 2002. Prominent opponent to the war in Iraq:

..."Milan's book is a synthesis of personal autobiography, social history, economic and political analysis, and a comparative cultural study. But it is not merely academic--the writing style  is gripping and Milan Kovacovic's personal story is directly  related to the most pressing issues of people's lives. This is a personal narrative that successfully asks peope to think deeply about their own values, their cultures, the countries and societies they live in, their own lives..."

...“After having heard Milan read from his book and/or describe some of the experiences that are detailed therein, one cannot help but feel transformed…For over 30 years there have been hundreds of students and colleagues who have benefitted greatly from his work…”

…"Dr. Kovacovic’s life gave me a new apppreciation for the word “dislocation.” Most people, it seems to me, faced with such hardships of family dislocation, uprooting, financial deprivation, could have easily fallen prey to a negative life. Somehow he turned these deficits—many of which he simply inherited—in on themselves and became a positive force for enriching other lives…This is an author I would like to meet, just to shake his hand.”

…"In my opinion Milan Kovacovic's memoir has the authenticity, the ironical distance and the elegance of style that talented writers and acute social critics so ably provide. I do regard this work as a major contribution to the social history of French peasants as well as a great achievement in the tradition of narratives..."

…"One curious aspect of your history is the extent to which it reflects my own, though of course there are also differences. Unlike you, I have never been very reflective, disregarding Socrates’ insistence of knowing yourself, but the very parallel of our stories has stimulated my curiosity about the patterns of my own life to which previously I had given little thought…

...Your comments on the psychological behavior of immigrants fill some of the most perceptive pages of your book..."

By Barton Sutter, Writer and Poet. Three-time winner of the Minnesota Book Award, in Poetry, Fiction, and Essay:

..."Because I like Milan so much on a personal level, I was very nervous when I went to hear him give a reading from his work-in-progress, Ma's Dictionary: Straddling the Social Class Divide. What if I didn't like his writing? The chapter that he read--"San Francisco Airport, Summer 1967" astonished me. I was moved and fascinated, and I came away convinced that Milan's memoir would be an important book. Since that day, I have had the chance to read other portions of the text and a summary of the entire project. My confidence in Milan's book has only grown. The man has lived an unusual life, crossing the borders of countries and the boundaries of social classes. In his memoir, he dramatizes telling episodes from his experience with the skill of a good novelist and reflects on them with the intelligence of a perceptive social critic. I would not be surprised if Ma's Dictionary turns  out to be a classic."

I have just finished reading the manuscript of Milan Kovacovic’s memoir and am very impressed with the ambitiousness of the project, the high quality of the writing, and the contemporary importance of the subject matter. There has been quite a lot of good writing about the 1960s, but Kovacovic’s chapter “San Francisco Airport, Summer 1967” is the first thing I would give to someone wanting to understand that period. It’s a perfect piece of creative nonfiction, using scenes and dialogue to capture the flavor of a real moment, and to relate the personal to history. Kovacovic’s ear for the American language is superb, his literary techniques of organization are elegant, and he provides a sober intellectual analysis of his material without losing his light touch.

Most of the good writing in America in the 1960’s, whether by Tom Wolfe, Norman Mailer, Joan Didion, or Robin Morgan, is done from inside a middle-class white perspective. One additional and very special strength of Kovacovic’s piece (and of this book as a whole) is its provision of a working-class narrator, who watches the hippies and watches the body bags returning, but who is hoping to escape routine by getting into Cal State-Hayward, not by dropping out of Stanford or Columbia.

Other sections of the book, such as “Ma’s Dictionary” are equally well-written and compelling. And the grand experiment of producing parallel but different versions in French and English is extremely interesting…Kovacovic’s way of handling these linguistic issues is ambitious and daring.

...There is great contemporary interest among researchers of nationalism and post-colonial literature, in the formation of what are being called “hybrid” identities. I believe Kovacovic’s book makes a unique contribution to this conversation, and will be of great interest to readers of many kinds.